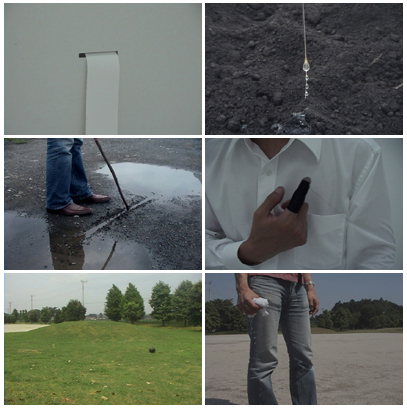 Since the late 90’s KOBAYASHI Kohei’s vigorous artistic practice and the independent artist collective “art space dot” which he has actively been involved in, have come to play a prominent role in the Nagoya art scene. Later at the ’99 Fukui Biennale, Kobayashi made a name for himself through his video work.
From ’99 to 2001, Kobayashi developed a body of work, in which he created various quiet, vacuum-like worlds that possessed a skewed sense of time and space in which shadowy characters would make gyrating appearances. In 2003 his work titled “1-10-1″, took a more architectural turn as he created small dioramas of “districts”, in which the camera would meander around gradually revealing an eerie labyrinthine environment in which the previous animated character’s role was subdued to a whispering palimpsest. As though the scope of his work was concentrically broadening, his next work brought Kobayashi and his camera outside of the studio to capture footage of environments and people, which shared a similar stark mood as his studio creations. These seemingly nondescript vignettes of time were edited together in a method that was devoid of any narrative intention and cumulatively suggests a world both alien and familiar. This work titled “2-2-1″ was met with high acclaim at its showing in 2004 at the Tama Art university Museum.
For this coming exhibition Kobayashi will premier a new video series titled “2-3″ which unlike his previous videos, meshes together sound with various performative actions which are connected together with subtle transitional contraptions which lead the viewer around in an orbiting abeyance around an ever mystifying “story”. A group of photographs depicting scenes from his video worlds will accompany this exhibition.