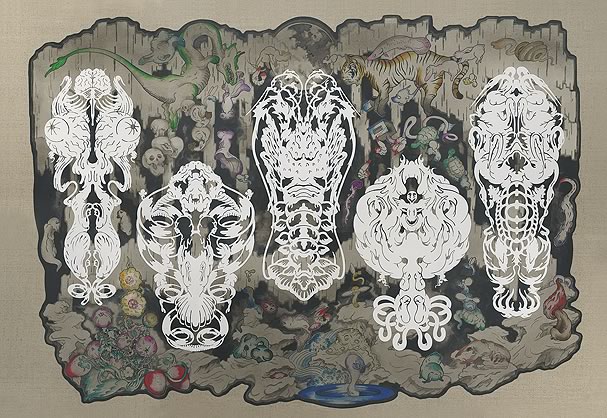 Greetings from YAMAMOTO GENDAI
We are happy to begin a new series of shows called “YAMAMOTO GENDAI Future Feature”, in which we will be taking steps out of the rigid frame-work of only showing already established artists, and instead follow our intuition by showing works by artists that we feel have good things going on and which we would like to help grow. Compared to our usual shows, these will be shown for a slightly shorter period of three weeks and will happen a couple of times, interspersed throughout the year.

The first of this series will be a solo-show by artist Ootake Tsukasa titled “CREAM”.
Ootake lives and works in Nagoya and is know mostly for his two dimensional works. He was initially schooled in a certain ‘Nihon-Ga’ (Japanese painting) technique, which orthodoxy insisted on the use of natural pigments and the depiction of such “timeless” motifs as vegetation. But after graduating school, he felt an unease between the anachronistic practice that he had devoted himself to and his
contemporary surroundings, and so altered his subject matter to something that he felt was more pertinent and real to him. Another qualm that he faced was with the medium of natural pigments, of which expensive, and time consuming qualities where seen as virtues meant to elevate the feeling of completing a work to a sacrosanct level. He felt these qualities as hindrances to his own work and swapped most of his traditional palette with acrylics. Soon after, he began employing the stylistic trope of the bold lined ‘manga’ which he used to depict spooks and other fantastical characters; amalgamations of his imagination and appropriations from such sources as traditional Edo
folklore. Honing these skills he probed the history and ongoing fascination that Japan has with the strange intermediary zone in which human and animal character traits are murkily indistinguishable. In
2003 he begun creating paper-cut-out works, which medium he had not touched since his first year in college, but on his second encounter, pushed to new brinks of detail. During this period of rediscovery, he felt that 90% percent of the work that went into painting was only a dutiful addition of visual information to achieve an initial creative impulse, whereas the process of paper-cut-outs was much more engaging because of its subtractive process that required the creator’s imagination and action to coalesce in realtime creation. He does not use a single blade, but instead uses scissors, which allows him to potentially create work anywhere. Before cutting he only folds the paper once, for perfect mirror symmetry. The completed paper-cut-out images exude a daunting power and absolutism, and also provokes a feeling of unease from encountering something alien, as nothing of the natural world is perfectly symmetrical .

Drooping cream in the shape of a donut spins round and round.
When the rotation occasionally slows, globs of cream pitter patter down.

—————-
Various meanings can be pinned onto what I make, but this dripping cream is the closest likeness.
Just as donuts lack a core or nucleus, so my current life also lacks these things.
Working with a clear goal or purpose and expecting deep mutual understanding when interacting with people are gradually dissipating from my life.
Although I am spinning around a non existant nucleus, there are small moments that do latch onto my heart.
These moments have a quality of ease that I try to put into my work. 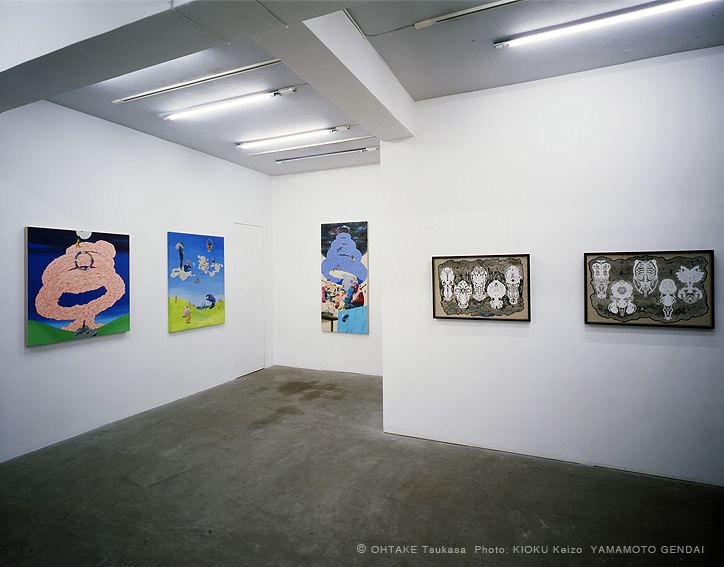