TATEISHI Tiger solo exhibition
“The Universe of Mt.Fuji of Tiger” 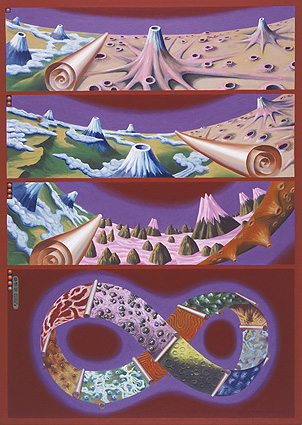 TATEISHI Tiger’s work stands out as an extremely unique if not anachronistic construction of worlds, which are created with an astonishing visionary force. The fragmentary and ambiguous nature of time, compositions provoking the fourth dimension, simultaneous historical and futuristic outlooks are all part of his wellspring of ideas, which he hones into a critically pointed wand to depict grand and discovery rife spectacles. Surveying the work of young Japanese contemporary artists will show that TATEISHI Tiger is continuing to be a pervasive and consciously inherited influence for many works; enough so that his oeuvre could even be called the DNA of much of Japanese contemporary art’s vernacular.
This show plans to be an optimistic springboard for many following shows of TATEISHI Tiger’s worlds of experimentation, overwhelming degree of completion and an unquenchable ‘desire for pictures’.

-TATEISHI Tiger was born in Fukuoka in 1941.
-In 1963, he submitted a large collage to the 15th Yomiuri Independent Exhibition, which received much attention. Subsequently he went on to be heavily influenced by Pop Art, which he aptly converted to address aspects of Japanese everyday life as well as the country’s current issues.
-From the mid 60ﾕs, he gradually began to draw cartoons.
-In 1969 he moved to Italy, where he worked for Olivetti typewriters as a designer, while finding time to exhibit his paintings at such places as Alexander Iolas gallery.
-From the mid 80’s his work began to feature epitomizing motifs of Japan, such as Mt. Fuji.
-In 1998, he passed away in Chiba prefecture.
From his inception as an artist in 1962, until 1967, TATEISHI Tiger was known by his birth name of TATEISHI Kouichi. But from 1968 until mid 1990, he developed, for its convenient catchiness, the moniker Tiger TATEISHI, which was not only written in ‘kana’, the phonetic notation reserved for non-Japanese words, but the order of first and last name was switched to mimic the Western manner. Although he continues to be remembered posthumously by the same moniker, the ‘kana’ has been converted to Chinese characters and the order of first and last name has been reverted to the original Japanese manner. 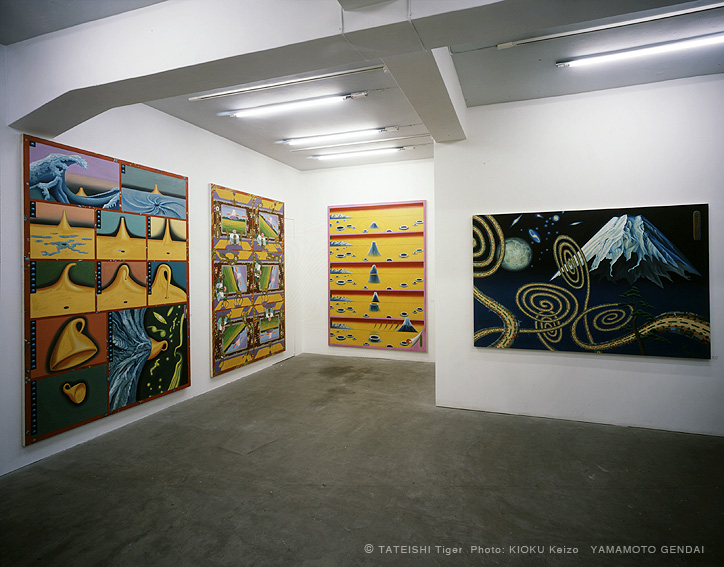 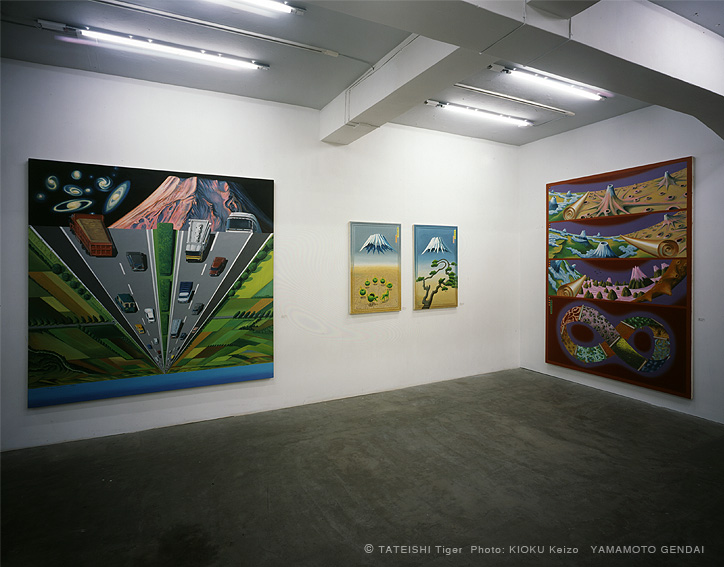