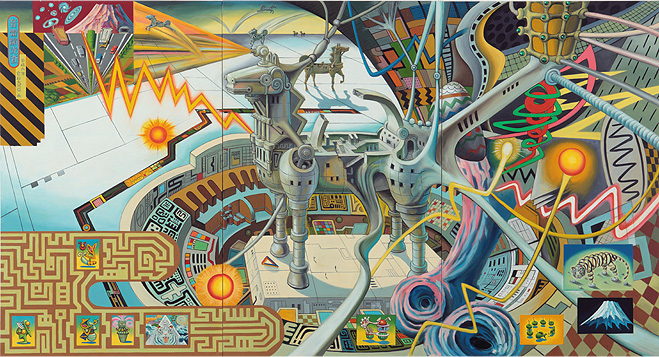 YAMAMOTO GENDAI is pleased to present Online Radar, a solo exhibition by Tiger TATEISHI from January 8th through February 5th 2011. This will be the first opportunity to publicly introduce three paintings by Tateishi, which have been recently released from a corporate collection. This exhibition will also include the artist’s self-portrait and a painting of his home province, which are both extremely rare in his body of work.

The three paintings, Online Radar, Guardians of Information and Canal Earth have been a part of a corporate collection since its production in 1994 and long been kept from public exhibition. These three pieces measure 145 x 268 cm and are exquisite illustrations of simultaneously super-ancient and super-futuristic looking worlds. The artist entered his later years around the production of theses pieces, and his compositional techniques had matured to reach the highest in these works.

As seen in Troy Fuji (1992), the repeating motif of a Trojan horse appears in Online Radar. The canvas displays dynamic composition of abstracted electronic beams that fly around the central Trojan horse augustly standing in a control room. Outside the control room, horses jump around on the flat plain that extends all the way to the horizon. Reference to his precedent works from the 1990’s makes this work distinctive as well as a tiger with a spiral torso that repeatedly appears in his works around the time. Such self-reference is often found in his later works, and well demonstrates mastery of the artist whose extensive creative activities included Manga and picture books as well as oil painting, illustration and pottery.

Guardians of Information and Canal Earth are striking pieces in the portrayal of vast earth. On both works the sun is placed beyond the horizon but the worlds illustrated in each paintings are individually unique.

Use of ancient frogs as a motif was frequently explored in Tateishi’s pottery works in 1993, and it reappears in Guardians of Information. A surging army of ancient frogs is a powerful feature in the composition of this piece, with the Nazca Lines and Machu Piccu depicted in the back. The white lines and electronic beams radiating from the sun are the key elements to bridge Online Radar and Guardians of Information as one consecutive series.

Canal Earth is a visually playful work in which the earth peels out to transform to a tiger, lamps grow on the mountain and giraffes blend with the ground like a trick art. The horse from Online Radar appears in Canal Earth with big waves and bullet trains around it.

Presented along with these pieces are DNA of Fuji and 1946. CHIKUHO Japan, which are especially unique among in the artist’s large body of work.

Central to DNA of Fuji is the portraits of the artist himself and his beloved dog. Tateishi rarely produced self-portraits throughout his career, and this piece was painted when he entered his later years to become aware of “Heaven’s will”. Mt. Fuji is placed upside down and dissolves into bands of rainbow and numerous spirals, and DNA structures, ancient clay figures and his earlier works are arranged all over the canvas. Viewer’s interpretation is easily fooled around in this artist’s playful puzzle.

In 1964 Tateishi painted his hometown of Chikuho region in Fukuoka Prefecture in 1946. CHIKUHO Japan. Chikuho prospered as a coal-mining town during the chaotic times after the World War II, while the heat of rising cultures and fierce labor-management confrontation filled the region. 1946. CHIKUHO Japan is a vivid illustration of the town by Tateishi, who grew up in the midst of the bloom.