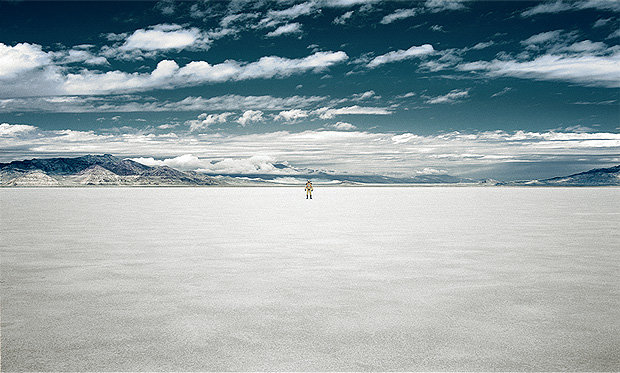 Atom Suit Project: Antenna of the Earth is an installation of a life-size figure of the artist himself in a radiation detecting Atom Suit equipped with Geiger counters, appropriating the well-known statue of Kuuya Shounin, a monk chanting a sutra which is represented by the miniature images of Buddha coming out of his mouth.

Yanobe created this piece based on the experiences from his visit to Chernobyl in 1997, which delivers the strong will of the artist to become like an “antenna” of diverse occurrences of the world after the crisis. Prior to this project, the artist created the radiation protective Yellow Suit in response to the threat of the Mihama nuclear power plant accident in 1991. Ever since Geiger counters have become essential elements in his works.

For 20 years up until now, Yanobe has been concerned with powers and phenomena which are out of human control, not limited to nuclear powers and radioactivity, and engaged in the themes of Survival/Revival.

After 10 years since its creation, we believe that the significance of Antenna of the Earth is ever more broadening.We hope this exhibition will be an opportunity to examine the practice of Kenji Yanobe and to introduce new perspectives on the reality in which we are living now.