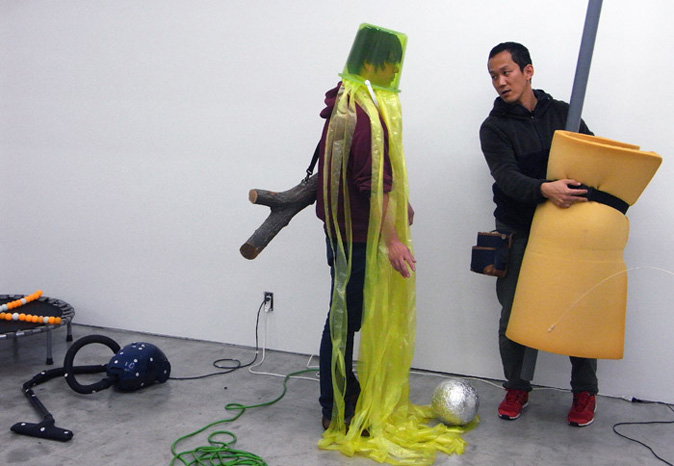 Artistic practice of Kohei Kobayashi has greatly evolved over the past 10 years. Kobayashi was first brought into public attention for1-3-1 (1999), a monochrome footage of a obscure human shadow moving in a closed space shot by a low-resolution surveillance camera, and in mid 2000s he released works like 2-2-1 (2004), a collection of fragmentary shots of unfamiliar actions and sceneries whose relevance to each other is seemingly so little. In late 2000s, his works has shifted to works like 2-8-1 (2009), a sequence of scenes of an anonymous street with intentionally scattered ordinary objects like plastic bottles, vinyl strings and paper scraps, and the artist himself in undistinguished actions like picking up the trashes and riding a bicycle.

In recent years, Kobayashi has practiced a number of live performances to extend such processes explored in his video works. As a part of a performance series 14 EVENINGS at The National Museum of Modern Art, Tokyo (MOMAT) last September, the artist presented a 2 hour performance after a text specifically created for the event by Asa Ito, a scholar in literature and performance. Ito quoted some actress on a TV show saying, “I don’t like watermelons because they taste like a rhinoceros beetle.”, and pointed out that a “leap in recognition” occurs while the natures of the actress, the beetles and the watermelon are lent and borrowed between each other. She argued that a “leap in time” would be similarly made possible by lending the nature of “human” to a “mountain”. “Objects” constructed according to this text were arranged throughout the museum space, and Kobayashi aimed to explain the structure of a time machine through words and attempted to execute a time travel.

A live performance by Kobayashi in collaboration with Ikuhiro Yamagata has been scheduled on Thursday November 22. By presenting a group of such video works and performance in parallel along with objects re-assembled based on the new text, Kobayashi will attempt to make the audience experience the possibility and impossibility of a “leap” that develops around the recognition of object/action/language.