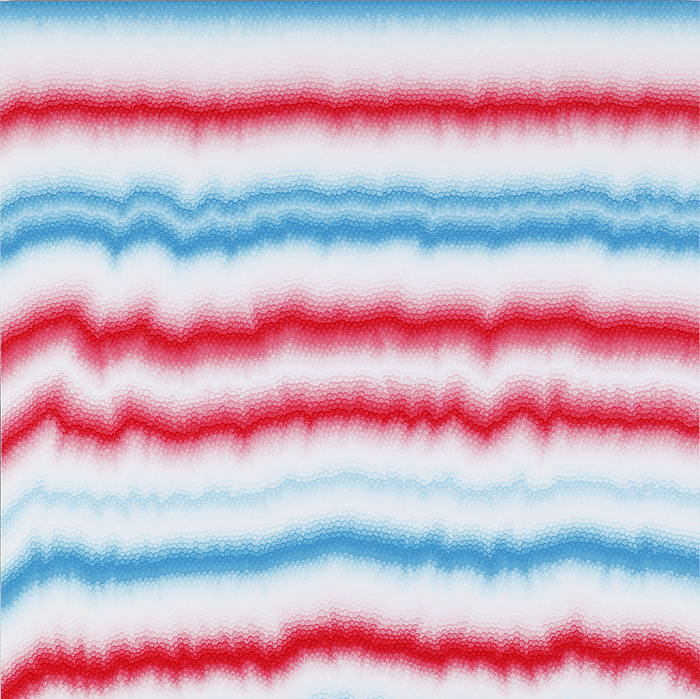 YAMAMOTO GENDAI is happy to kick off the year 2015 with a solo exhibition of Yayoi Deki, presenting a body of new work of three-dimensional optical illusion, and from her recent National Flag series, both covered by the artist’s unique technique of finger-stamping.

Deki has attracted much attention from the very beginning of her career through a number of important exhibitions, including Ground Zero Japan (Art Tower Mito, 1999) and Roppongi Crossing 2007: Future Beats in Japanese Contemporary Art in Japan, and The 7th Venice Architecture Biennale (2000) and The 7th Lyon Biennale (2003) internationally. She has also been involved in a number of projects outside the field of fine art, such as main advertisement visuals for Tokyo’s premiere district Roppongi Hills in 2013 as well as collaborative projects with musicians and corporations, actively corresponding to the atmosphere of the time.

This exhibition comprises of two and three-dimensional works, both created with “finger stamping” technique. Typically every inch of Deki’s artwork is colored and covered by numerous “finger stamps” — dots of colors pressed with her own fingertips. The artist paints a face on each dot, and dense accumulation of these tiny faces in gradient bright colors becomes her artwork. Among the human faces, faces of animals resembling pandas appear here and there, in which one may identify the eternal girlhood in the work of Yayoi Deki. Every piece of artwork enjoys extremely pop and euphoric imagery, and the delirium of obsessive details revealed upon close view adds depth to the appeal of the artwork. What makes her artwork a “painting” is not only her technique, but also the ambivalence in the fundamental lunacy of human nature, which arises among the pleasure and innocence in the flood of colors, and almost magical depiction of details.

Presented for the first time in this exhibition are three-dimensional works based on three-dimensional optical illusion. These objects appear different from objective reality when they are observed from a certain angle. A series of such pieces of wonder, approximately 40 centimeters in size, will be covered by Deki’s dazzling finger stamps and detailing to lead the viewer to a new visual experience.

Also on view will be new pieces from the national flag series, in which each tableau is created by gradation of colors selected from one national flag. Such works of fresh and fluttering imagery of national flags as well carry a face in every finger stamp on each work, and reminds of people that constitute a nation. As well expressed in the exhibition title Traveling ♪, Deki’s new artworks unfold the feeling of expectation for places yet to visit, wonders yet to encounter, and people yet to meet.

Following exhibitions at FOIL Gallery in Kyoto and Gallery Trax in Yamanashi, we will also hold a book launch exhibition to celebrate the publication of PANDY & MIKO, released in October 2014. The artist’s partner Motosuke Kashiwabara photographed PANDY and MIKO, Deki’s beloved Chihuahuas, and Deki provided her works for the pictures in the book. 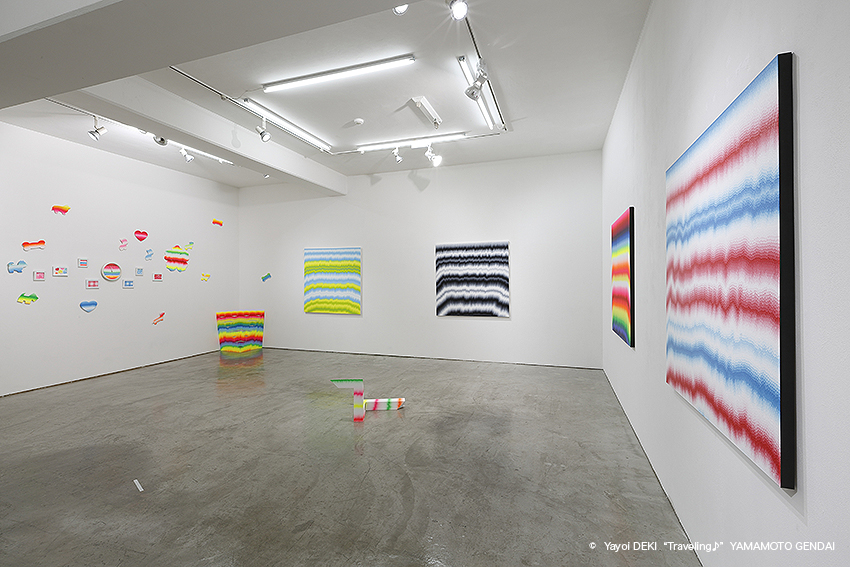 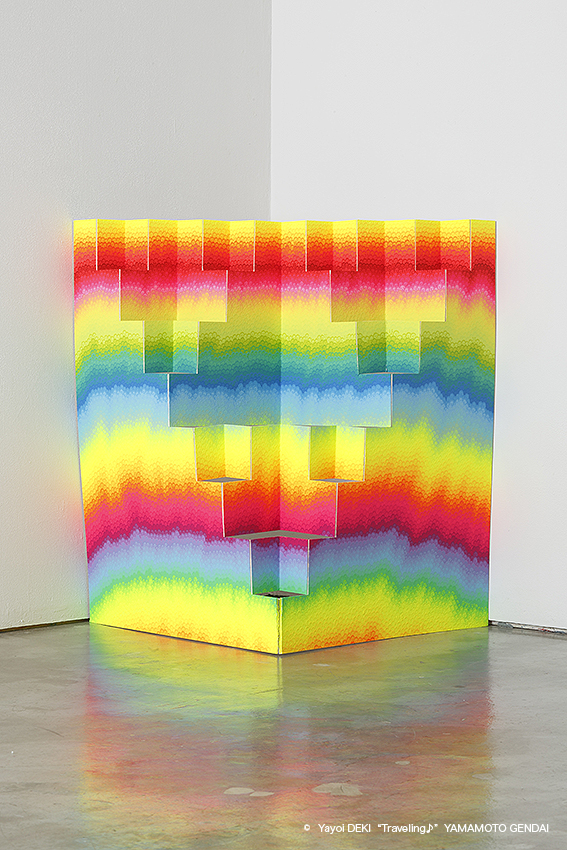 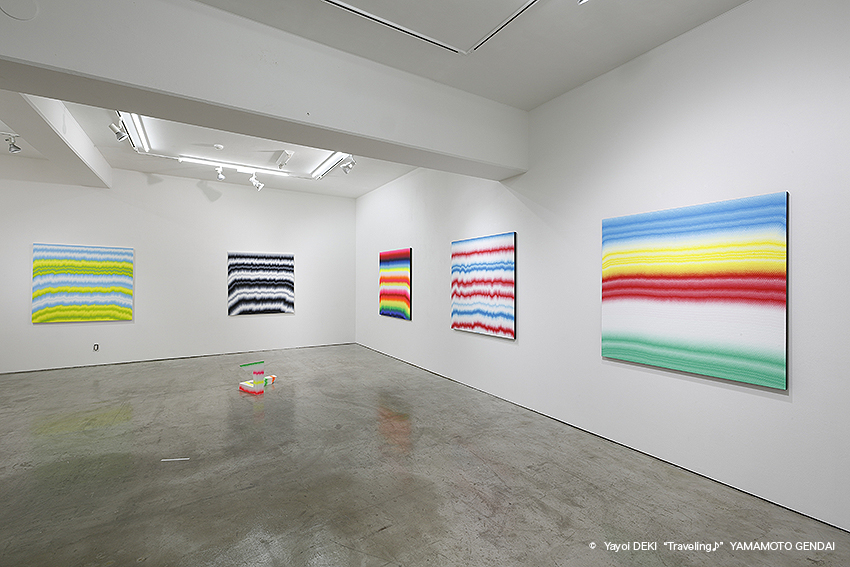 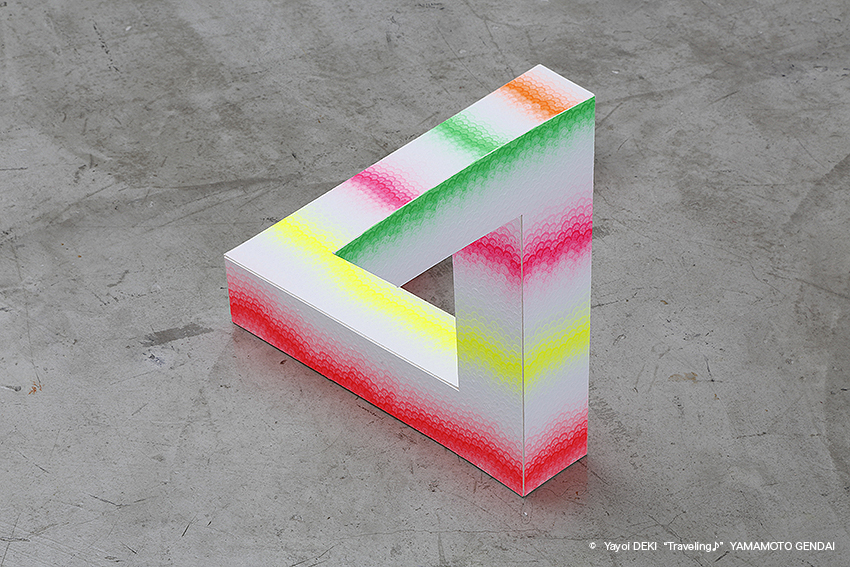 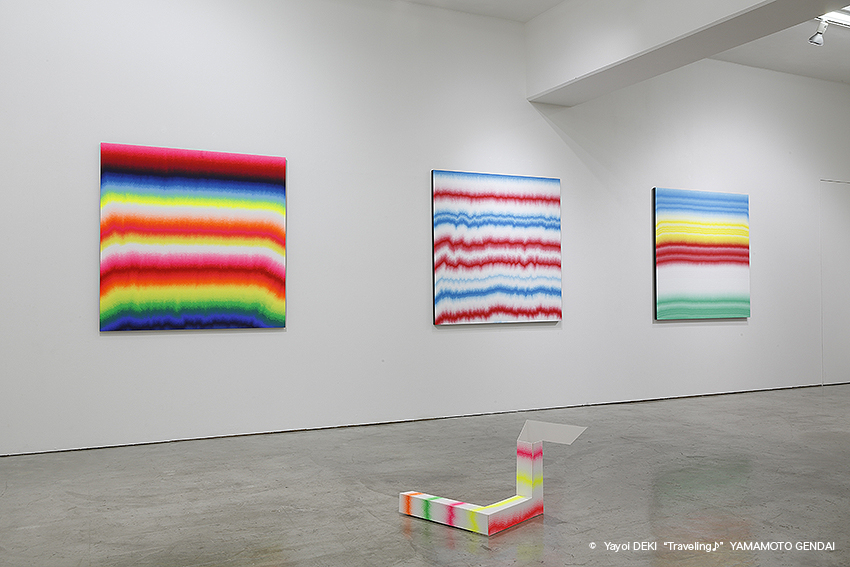