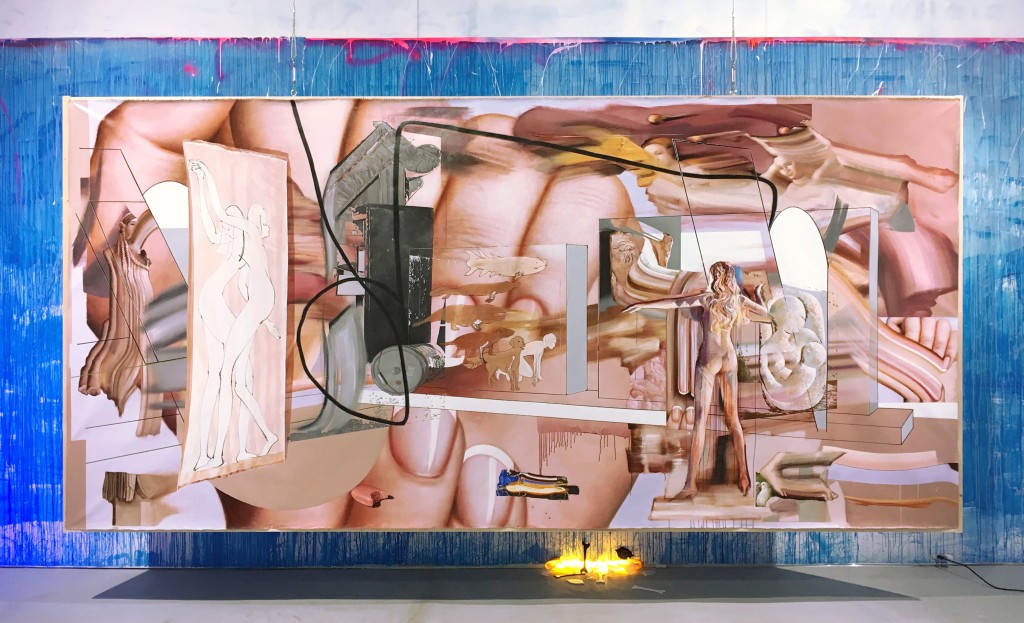 Claiming the dead-end and evolution of physicality in the stream of art history, IMAZU extensively participates in various exhibitions and she has been receiving wide recognition for the recent years. Her works incorporates various image data taken from different contexts found on the Internet to reconstruct using Photoshop to finally compose on the canvas. The exhibition spatially alters the main gallery centering around a large-scale of her new painting in 2×4 meters entitled “Swoon,” along with some of the works inspired by others like Constantin Brancusi’s sculpture, “Sleeping Muse.”

Over her thoughts on evolution and motherhood, “Swoon” is composed of a collection of various motifs such as evolution diagram, “Eve” painted by Lucas Cranach in his painting and sculpted figures of a mother holding a child in her arm. It also appropriates some of the familiar motifs from her previous works onto enlarged manicured fingers occupying the first layer of the painting. So-called “Nail Art” is a wearable and delicate form of painting and the smallest media to put directly on the body which she has been continuously paying her attention to, and they appeared for several times in the past. Her paintings echo a history of life and art, where this exhibition oversees the gallery space where accumulation of her time for contempolation and art production. Given the freedom, a black and bold line playfully runs across the canvas with a moderately light-toned color palette and it eventually blends into different images to be out of the sight, as if her computer mouse accidentally removed it off the screen. This motion preserves humanistic touch from the expression of the digital on the tableaux and challenges to show ambiguity in our physicality – working virtually on the computer with a finger tool from Photoshop and painting a canvas with a brush in reality, which plays a significant role all in her artwork.

Repetition of several images; faces, hands, square-shaped screens and couples is narrating the artist’s personal events and unbearable emotions being raised and brings up her interest in the experimentation on the method of impromptu expression that paint creates to merge with solid images that digital creates with a computer.